Today is a simple one: just what I managed to play over last weekend. I get a email every week from Playstation Network and in each email they give me the number of trophies (in-game achievements) that I’ve earned and how mcuh time (in hours) I’ve put into online gaming on the PSN Network. I bring this up because every since I joined PSN way back in 2006 with the Playstation 3 (even though I didn’t really play online until 2007 for the most part), I’ve racked up an impressive (or ridiculous, depending on your outlook for online gaming) over 16,000 hours of online play. That equates to roughly 667 days (or roughly 1.8 years) of online play. Now, understand that this is over 13 years of being connected online and also playing games like Mass Effect Andromeda or Assassin’s Creed Origins for over 100 hours while being connected to EA’s servers or Ubisoft’s servers even though I’m playing the game in single player mode. My total actual online play (where I play with/against other humans) is probably about half that number. And that’s just two “generations” of game systems–imagine what my gaming life is like through all systems.

Still, I bring it up because it puts into perspective how much time I’m putting into games. Imagine if I’d put that much time into my writing or my schoolwork; I’d have at least one novel finished, possibly more. So, seeing that number has been an inspiration to me–not to do less gaming, but rather to do more strategic gaming and to put as much time and effort into the things that I really want to make myself just as successful in real life as I am in my “gaming” life.

I put more time into this game than I had intended, but I was able to finish off a major storyline in the game and then a related secondary storyline. One of the reasons that I put so much time into it was that the enemies in the game managed to kill me due to an unforeseen occurrence in the scenerio (the rebels that were supposed to aid me by causing a distraction died way too quickly and I was caught out alone against an entire garrison of enemies). Well, I couldn’t let that stand and, when the game reloaded, went through the process of (laboriously) taking down the (many) enemies of the base one-by-one. Took about 2.5 hours all told, but as the cliche goes, revenge is a dish best served cold. I cleared the base of all targets by any means necessary. Now that 2.5 hours was in addition to the time I’d already spent completing the Main Quest of taking down the “Crocodile” (a major enemy in the game), but it was still worth it and I’m currently in between missions for the next major story arc of the game.

This is a game I got for Christmas. While I wasn’t really entranced with the “Reboot” of Lara Croft’s adventures with the less than stellar (& overly praised Tomb Raider game from a few years ago), I’ve found this one to be a much more refined and stellar game. Had this one been the “reboot,” I might have been less dismissive of the need for a reboot because so far, this one is far more like the original Tomb Raider games that the crappy reboot even though this share’s that games basic design philosophy and graphical skin. There’s just something about this game that compels me to move forward, where the Tomb Raider reboot game from 2013 did everything to push me away and made me want to gag every time I played it.

This session consisted of me completing all of the challenges in the first two areas of the game (except for one that I don’t have the right arrow skill for and will have to return to when I do). I then did my first “Challenge Tomb” (which is an optional tomb that I can explore and figure out how to complete for extra rewards and experience). I’m early in the game–the game internal tracking says I’ve completed 12% so far), but if the rest of the game is like this first bit, I think I might like it quite a bit more than the Tomb Raider reboot that I absolutely destested and still don’t feel is a worthy game in the TR universe. I’ll keep playing and let you all know if I still feel this way as I go through the rest of the game.

Well, that’s it for now. I did play a few other games, but I didn’t put near the amount of time in to any of them as I did these two, so I hope you enjoyed this post! 🙂

Please consider supporting these fine small press publishers where my work has appeared: 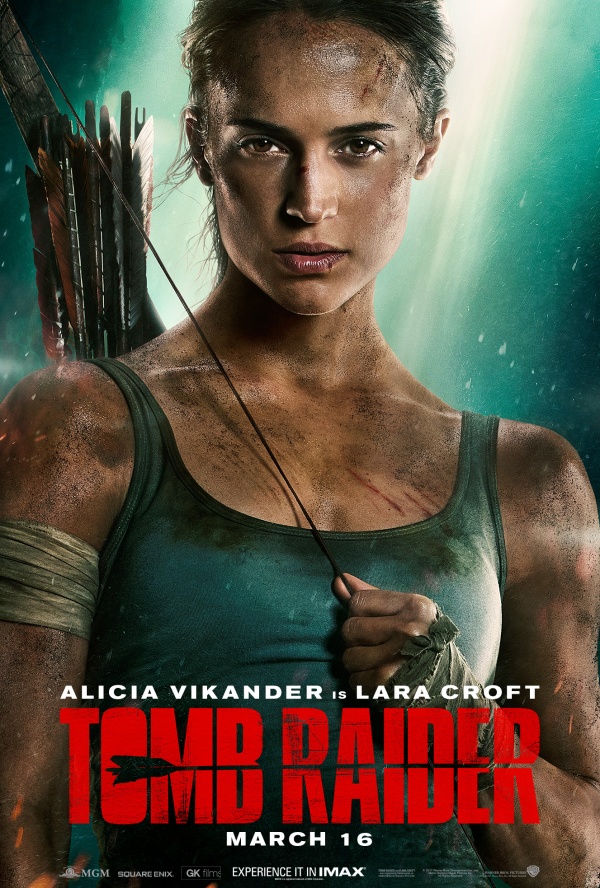 Okay, so this weekend I watched Tomb Raider, the 2018 version, and I actually found that I liked it much more than I thought I would based on the low Rotten Tomatoes score.  While it isn’t a perfect movie, there is more to like (for me at least) than I thought.

Okay, so I kind of like Alicia Vikander’s performance of Lara Croft, almost more so than I do the one presented in the “rebooted” timeline.  I still think the “posh” Lara from the games such as: Tomb Raider II and Tomb Raider: Legend are the best versions of the character (the ones that Angelina Jolie based her performance of the character on in her set of movies).  However, I think this particular Lara Croft is closer to the original conception that the one portrayed in the “rebooted” games (that I’ve played so far).  Lara seems both competent and sympathetic at just the right moments.

Okay, so if Vikander’s performance is so good, why the low score on Rotten Tomatoes?  For me,  the script, or more to the point, the story.  In this story, we’ve seen variations on it many, many times.  Daughter loses father, daughter goes on quest to find father, father seems to have delusions of mysticism tempering his judgement, daughter ultimately finds her destiny after her quest to find her father.  I can think of this particular story “form” for half-a-dozen Hollywood movies.  Essentially, the 2nd “reboot” of Spider-Man, The Amazing Spider-man (with Andrew Garfield) tells the same story–Peter loses his family, Peter discovers his powers, but also discovers that something nefarious happened to his parents.  At the end, Peter ultimately finds his destiny.  Again, this particular plot strand has happened multiple times in Hollywood movies.

By my grading scale 0-100, this would earn an 81.  A performance that I like, with (fairly) obvious CGI special effects, but those effects are at least clever and inventive, saddled with a plot sequence that we’ve seen multiple times, means that this is just barely above average in terms of quality, but not the best, nor most emotionally engaging fiction around.  However, for me, it was certainly better than the 51% it currently has on Rotten Tomatoes.  With a more inventive story (that doesn’t crib so much from Hollywood and that isn’t a simplified rehash of the “rebooted” game–which it also is to an extent–this one could have been great, rather than simply passable.

Okay, so this blog post is liable to be controversial, but I’m going to say it anyway: “old” Lara Croft (Old Lara) as a character was better in many ways than “new” Lara Croft (new Lara).  Old Lara Croft was portrayed as a “sex symbol” by the media of the late 90s & early 2000s in order to understand this new female character representation in gaming that had traditionally been infused with male characters and male sensibilities.  Old Lara was a breaking of the stereotype, but paradoxically a part of the stereotype in that it was her gender and sexuality (unrealistic proportions) that marked her as an unrealistic construct.  New Lara is meant to counter this: a realistic representation of a feminine body type and a new, more “realistic” backstory.  However, as both old and new film adaptations have shown, people (including the team at Crystal Dynamics currently tasked with developing new games) don’t really “get” Lara Croft and what makes her tick.

Lara Croft is brilliant and I don’t mean that in the “great” sense of the word.  No, I mean it literally.  She is brilliant and much like another British-created character, Doctor Who, she is the “smartest person in the room.”  The Doctor works because he is a “madman in a box” while Lara Croft never was given that one sentence that summed up her character.  For me, Lara Croft is a “raider of Tombs.”  This is where so many representations of her go wrong–they neglect to give her a reason for her to raid tombs (a why is she doing this/why does it matter).  Tomb Raider 2 (from Core) and Tomb Raider Legend (Crystal Dynamics) are the purest expressions of why does what she does and what is at stake if she fails in her quest.

Some might argue that the new games (the 2013 reboot of Tomb Raider), the subsequent sequels, and the newest movie (sans Angelina Jolie) depict a better “version” of Lara, but I argue that’s not true.  Lara, who is emotionally blasted from killing a deer in the 2013 reboot, is not much different than stereotypical representations of females of the past.

Everyone keeps making the same mistake of comparing Lara Croft with Indiana Jones (Indiana Jones movies) or Nathan Drake (Uncharted video game series), when her true comparison is Doctor Who. In every room, Lara is (as is the player through the extension of agency) looking for the “exit” or the solution to the puzzle, trap, or what have you. Once located, it becomes a “game” to figure out how to get Lara from point A to that exit.  However, you (the player) and Lara (the character) go into the situation believing and expecting that there is ALWAYS an exit and always a SOLUTION to the problem, so long as you can reason it out.  This is exactly the same characterization used to describe The Doctor: “he always wins because he always assumes he’s going to win”  (paraphrased from Series 9, Episode 2, “The Witch’s Familiar”).  Lara goes into any situation knowing there’s a solution, she just has to find it. Again, she’s smartest person in the room–no matter her physique.  Now we just need for Hollywood to discover this fact and for Crystal Dynamics to rediscover Lara as an actual “Tomb Raider” instead of just relying on it as a “brand name” used to market and sell games in the “franchise.”